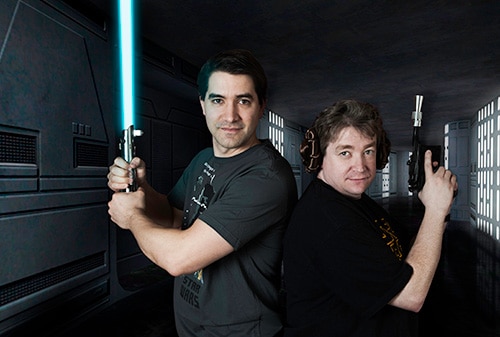 What do Luke Skywalker and “Lovely Rita” have in common? More than you might think, as illustrated by Princess Leia’s Stolen Death Star Plans, the new full-length satirical concept album from music-parody duo Palette-Swap Ninja.

Deftly merging two pop-culture landmarks, Princess Leia’s Stolen Death Star Plans tells the story of 1977’s Star Wars to a custom recording of The Beatles’ 1967 masterpiece Sgt. Pepper’s Lonely Hearts Club Band – in order. “We’ve released song parodies before, but nothing this ambitious,” says singer/guitarist Dan Amrich. “Once we settled on merging A New Hope with Sgt. Pepper’s, we completely committed ourselves to turning these two sacred cows into the ultimate double cheeseburger.”

“We were surprised to find just how well it all synched up,” says Jude Kelley, the band’s keyboard player and digital drummer. “The title song sets everything up with the pursuit of Princess Leia on the Tantive IV. ‘She’s Leaving Home’ hits just as Luke decides to follow Ben to Alderaan, and the circus atmosphere of ‘Being for the Benefit of Mr. Kite’ is the perfect parallel for Mos Eisley.” Similarly, Ben teaches Luke about The Force to the mystical strains of “Within You Without You,” and both of the original works end in thunderous explosions – the Death Star’s destruction and the final chord of “A Day in the Life.” The resulting album presents two classics that superfans know by heart in a way they’ve never imagined.

Jude and Dan first met as members of a Bay Area ’80s cover band in 2003, and hatched the idea for a geek-culture parody project while sharing long car rides home from rehearsal. When Jude relocated to Boston a few years later, Palette-Swap Ninja simply collaborated cross-country, ultimately releasing an album’s worth of material online to a loyal fanbase. A fan-created YouTube video for “Halo ((All I Play-Oh))” – their spoof of the Red Hot Chili Peppers and the Halo series of videogames – has received half a million plays to date.

Both musicians possess serious geek cred. Jude is a research scientist and ex-chemistry professor who restores classic arcade machines in his spare time. Dan has spent 20 years in and around the videogame industry; his editorial cartoon character “Dan Elektro” at GamePro magazine was so popular, it was made into an action figure.

The timing of the parody project couldn’t be more perfect: Star Wars celebrates its 40th anniversary on May 25, 2017, while Sgt. Pepper’s marks 50 years just a week later on June 1. “We both grew up obsessed with Star Wars and surrounded by Beatles music,” notes Jude.  “This whole project comes from a place of deep love and respect, so we had to take the time to do it justice. The final album needed to be high quality, accurate, and entertaining on repeat listenings.” Authentic touches included recording the same model of vintage organ the Beatles used on “Lucy in the Sky With Diamonds” and weaving in musical motifs from A New Hope where fans might least expect them.

“Recording all our music from scratch has always been part of the Palette-Swap Ninja process; it wouldn’t feel right to just use karaoke tracks,” says Dan. “And we hand-craft our lyrics, down to each syllable. Making sure the words hit the right rhythmic cadence and told a coherent story – and would make fans smile – took more than a year.”

“We think we’ve created something worthy of the source material that fans will really enjoy,” adds Jude. “We like to think that the Force was with us.”

Princess Leia’s Stolen Death Star Plans is available for download for free here. A YouTube playlist of lyric videos is available at http://bit.ly/starwarsbeatles.