At last, the contest has concluded, and TalkRadar has announced the winner. It’s a little past the two-hour mark (you read that right) but SamueltehG33k took the top prize by a narrow margin.

Now, I know he didn’t do the whole song, but he did do it in person, and the repeated takeaway shot was so silly it got me laughing. Jude actually liked my other favorite, 1CrazedPenguin1’s LittleBigPlanet entry, slightly more:

So I turned it over to Chris at Radar for the tiebreaker. He said he thought the guy who actually went out to Wal-Mart with a camcorder should get points for bravery. So there you go. Samuel gets the media player and Penguin gets the Sorry! board game. Chris has both prizes and will probably be sending them your way soon.

I know it was a tall order — video is not as easy to create as, say, a poem or even a Photoshop joke — so I appreciate that people even gave it a shot.

(As for the song ideas that the TDar guys pitch…I recommend they use their fine recording equipment and do ’em their damned selves.)

New contest TBA shortly. This one will be a little easier.

Winner to be announced tomorrow

Tune in to TalkRadar — a victor has been chosen, and he or she will receive the spoils. I’ll post more here after TDar makes the big announcement on episode 33. Or 34. I guess it’s all about how you count the holiday special. But the next one, the one that comes out on January 9th? Listen to that.

So Chris from TalkRadar didn’t actually tell me when the contest was officially over…and it appears he has gone home for the holidays.

I guess that means the deadline has been extended. If you’re still working on an entry or would like to polish your existing one, now’s the time. Just keep sending your entries to dojo@paletteswapninja.com and I’ll add them to our YouTube favorites.

Oh, and in case it hasn’t been mentioned, there is a second prize for the runner-up. Yes, really.

Time’s running out for the “Wii Christmastime” video contest, so if you plan to enter, send your links in to dojo@paletteswapninja.com. We also have a YouTube account and you can get us there, since we’re asking for YouTube submissions. And if you send it in to GamesRadar, that’s cool too — we’re working together and will pool all the submissions when it’s time to judge.

Happy Black Friday! “Wii Christmastime” is posted for download on the Songs page. Merry Christmas to all, and to all, good Wii hunting.

Remember that TalkRadar is hosting a video contest — basically, make one for the song — and the prize is a good one. I have grainy photographic proof. 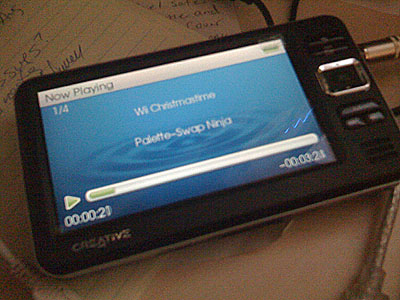 That’s the actual unit offered as the prize, featuring our actual new song on its actual screen. So be creative, okay?