The Difference Between Jude and Dan

Palette-Swap Ninja is, as you know, a two-man operation, operating on opposite sides of the country. We are both very busy this weekend working on two songs simultaneously, plus a third project on the side. 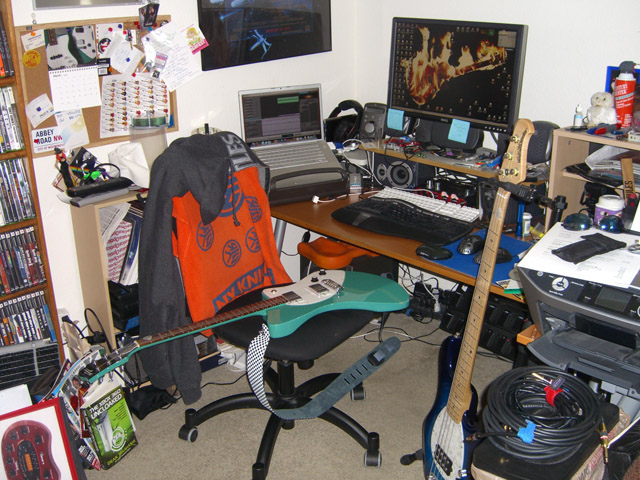 When the tracks come out late, you now know who to blame.

Jude said “I guess I should have put a keytar up against the wall.” I said yes, if only to make me look marginally less like a slob.

Jude sent some basic tracks this weekend for me to start playing with. I busted out the Variax and started the very arduous task of recording the guitar on this one. Truth: I’m not a good enough guitar player to play this, but I am going to play it anyway with some digital assistance. I will come clean when the song is out, which will hopefully be by the middle of next month.

People always ask “What’s the next one?” and I never want to say. I mean, come on — that’s part of the fun. If you can guess the punchlines before we even tell the joke, it’s not very funny — and what if your ideas are funnier than ours? It sets everybody up for disappointment. But I will offer another clue: Stratocaster, neck pickup. Good luck with that.

Jude and I are now both working in GarageBand, though we were only in the same version of GarageBand for about two days before I upgraded to ’09. I am used to programs like SoundForge and, to a lesser extent, Pro Tools, but I ditched both so I could go with something friendlier. It makes some of the stuff easier and some of it harder, but again, it’s all friendlier. I can figure it out with a web search or two, if not simply mucking about with the menus. I think I’d eventually like to get Logic Express, since it’s the big brother of GarageBand and can import all the projects natively. Yes, please.

Gear updated (and some whining)

Jude had a few spare moments so he jotted down the highlights of his rig. It’s up on the Weapons page, and I’ll add some photos a little later.

It’s funny, but Jude and I have actually never used the same recording software. Jude’s used GarageBand 2 and 3 on various projects, and while I had access to that, I was more a SoundForge/Vegas guy, until I switched to Pro Tools LE. Now, I have a degree in this stuff — Bachelor of Science, TV/Radio, with an Audio Concentration — but I got that at the very end of analog’s glorious reign. My senior year, the music school (not the communications school) got its first digital audio workstation, and I never had the opportunity to use it. I was busy slicing up 1/4″ tape and learning how to make rock and roll on 1″ Ampex eight-tracks. All the sound theory and stuff about microphone placement still turned out to be very useful, but I taught myself how to use digital effects and whatnot. Even after several years of SoundForge, PT was a disaster for me — highly irritating interface, specialized hardware requirements, and ultimately, my setup wasn’t built specifically for it, so Pro Tools crapped all over it. I finally threw up my hands in disgust and fired up GarageBand, where Jude has been sitting and waiting for me all this time anyway.

None of that really matters, but it might make the next song a little easier to produce. We are hoping for a March release, and as usual, we want to keep it a surprise until a little closer to the time. We have some other plans in the works, too, and I’ll reveal them more when they become real.