Friday was…awesome. When a friend sent a note on Twitter to let me know that the Entertonement page for “Learn to Spell” was climbing the charts on Digg, I was kinda floored. It was at about 740 when I saw it, and said “If it hits 1500 I’m going home.” It didn’t — but it did wind up as the 10th most popular story of the day with 1200 digs. Check it out shortly before the milestone. 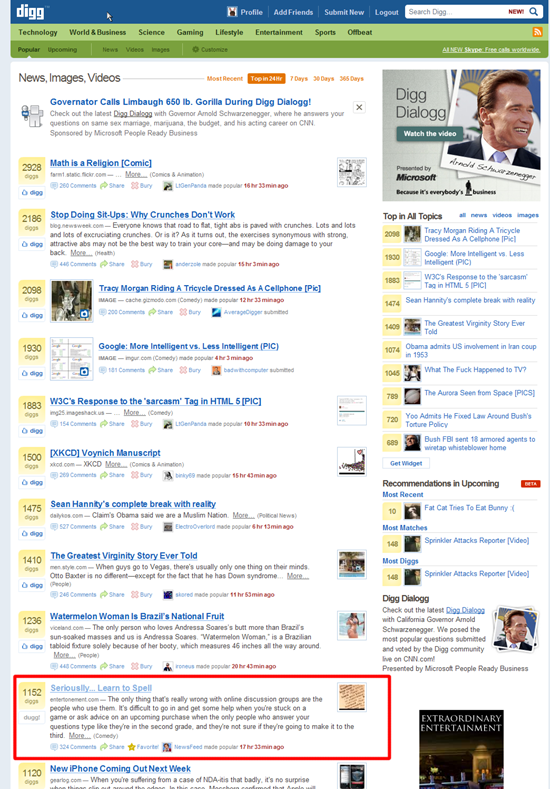 We beat the iPhone leak, but not the lady with the watermelon butt. Getting that much attention out of the blue is a real thrill. The Entertonement player hit more than 60,000 plays that day.

Of course, that Digg article came with a flurry of Digg posts in three camps. One camp thought it was a funny song. One camp thought it was stupid that grammar Nazis had a theme song at all and took us to task for not accepting people’s ignorant misspellings as “the evolution of English.” (No, it’s just laziness.) And the other camp said the song itself sucked — “he should learn to sing” was the one that got me, along with the person who said Jude’s use of the same exact organ as the original song was clearly the work of a Casio keyboard on autoplay.

I’ll be honest — that song is at the top of my vocal range, and even though I cut the vocal three times I wasn’t entirely happy with how it sounded. Then I got sick with the flu bug for three weeks, which killed any and all attempts to fix it. But I don’t know that I could have; at a certain point you have to say, hey, this is as good as it gets — for our version of the song, it’s going to have to sound like me singing it. We build everything by hand and don’t use AutoTune to correct flaws; we sound the way we would sound if you were to hear us live…which is funny since we never play live. So we’ll take a certain amount of pride in the flaws, because they’re real.

Anyway, no downside to it. We were thrilled. And if people post and say it’s dumb, we still win — they cared enough to post about it. If you were one of those people who posted, good or bad, thank you.