The meeting went off without a hitch. We got to have lunch with a handful of our supporters who were able to make it to the show, including JugglerOfGeese, Xiantayne, HeartbreakRidge, SitSamBry, and Kdorff. We took over a section of the food court and LAID WASTE TO IT. Total irresponsible rock and roll behavior. Okay, we really just sat there and talked for a good 90 minutes, and then we bussed our tables politely. But it was great to meet people face to face and talk about stuff. Thanks to everybody who could make it!

More details about what you REALLY missed after the jump, including incriminating photos. 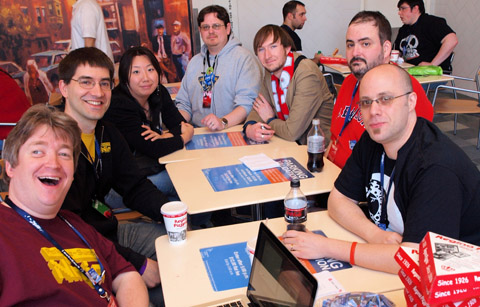 Our goal was to have the latest song done in time for PAX, and our big surprise was going to be handing a CD to the people who attended. Then I lost my voice due to illness and travel, and only got as far as finishing the guitars and the lyrics. So nobody got the new song at PAX, but the good news is we are that close to finishing it — vocals are always one of the last things to be recorded. Once I’m healthy (which, given the nature of how bad his voice is, may take a few weeks), you can look for a release soon. We’re tracking for late April. 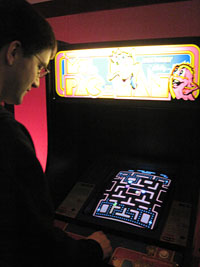 Those in attendance did get some other juicy info: What the next song is about, what the next two songs are about, and what we’re thinking of doing a bit further down the road. We really appreciated having a sounding board for those ideas but it was definitely something that had us worried as to whether we should do or not. We generally keep everything super quiet for two reasons: one, jokes are funnier if you don’t know they’re coming, and two, we were afraid other people might steal our ideas if we shared them too soon. We are less concerned about the second reason now, but still strict about the first. The surprise factor is, I think, what makes it worth doing, and hopefully with repeated listenings, you pick up on little things and subtle elements you might have missed.

Jude and I got to wander around the show a little bit, and spend some time in the Funspot classic coin-op room. We both got to play the only known copy of Crazy Otto (the Pac hack that became Ms. Pac-Man — that’s Jude playing it in the photo to the right) and the oddball laser game Us vs. Them. Jude also got a nostalgic warm fuzzy for the cockpit edition of Sega’s Buck Rogers game. Then he went next door, saw that there was a “beat Mike Tyson” challenge in NES Punch-Out!!, and showed the kids how we old-schoolers do it. He very nearly beat Tyson while everybody watched!

On the plane ride back, one of the song concepts we discussed got fully fleshed out into lyrics which are now more or less final. That’s nice when it happens that way but it’s not usually that easy.