We are making a video

The rumors are true. If you have listened to either Episode 14 of the Community Voice Podcast or TalkRadar 112, I spilled the beans about why we felt it was so important that everyone attend California Extreme this year: We secretly shot a video for “Arcade Gaming Shrine” and were quietly inviting friends and supporters to be in it. Kat also took some photos that we’ll soon be posting around to Facebook and whatnot as our “official” shots. Here’s a small version of one: 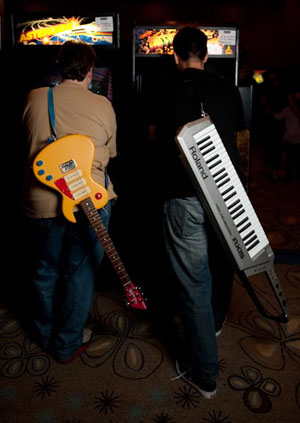 The show was a blast anyway, but the video shoot made it extra special. I don’t want to give too much away about exactly what is in the video because I want it to be a surprise to anybody who wasn’t there. I can say that we made good use of over 400 classic arcade machines — everything in the song was on the show floor except for just two games (Daytona USA and Ladybug). Also, several members of the GamesRadar/TalkRadar crew helped us out and stayed up in the wee hours of the morning while we lip-synched with the best of them. We are forever grateful to the CA Extreme gang for trusting us when we came to them with this crazy idea and we hope the final video will do them proud.

The video is being edited now and we are picking up a few shots we didn’t get during the weekend. I figure it will be online sometime in the next six to eight weeks. Hopefully sooner but realistically, we have a lot going on in real life.